5. Lots of Ways To Do Alfalfa Plots...But Which is Best?

Crop research is hard.   No really.  There are numerous factors that can keep a researcher from reaching the goal of a good outcome that will show treatment differences.

Probably the biggest factor in a poor outcome is field site variability.  Differences in field conditions like texture, nutrients, CEC, pH, organic matter, drainage and many other factors can often affect yield in that spot often more than the treatment under investigation can.  That is why it is so important to try to position an experiment in as uniform a spot as possible.  Perennial crops like alfalfa present other variable issues that can last from year to year.   Like a weakened part of the field due to poor emergence or stand at planting.  Animal damage.  Poor nodulation.   There are many others.  Alfalfa research has been conducted at the North Central Research Station almost annually for twenty-five years.  We have implemented quite a range of different experimental designs in search of what will give the best measure of treatment differences.  Here they are.

In the early days we used to have plots where we would apply different fertilizer treatments and then harvest and weigh the small square bales that came off of it.  We would get good treatment measurements, but you would have to handle that 50 pound bale at least four to five times during the harvest:  1. Pick it up off the baler, or off the ground, and load onto the trailer; 2. Put a plot stake in it to mark the plot number and stack it; 3. Unload from the trailer onto the scale for weighing; 4. Carry it from the scale to the bale elevator; 5. Stack it in the hay mow.  Whew!  Unfortunately I have no pictures of this operation or what came next.  After that we decided to eliminate the bales and work with fresh cut hay.  A hay wagon was fitted with weigh bars so that weights could be taken.  Again, treatments were applied to long plots.  At harvest, the alfalfa was cut then windrowed and then blown into the wagon with a choper.  This just did not give accurate weights as the numbers shifted around too much on the scale.

In the past ten or-so-years there have still been some different approaches.  Sticking with the long plots, at harvest we ran a round baler over the plot to collect the hay.  Getting the machine to kick out the partial bales at the end was sometimes a challenge.  We would pick up the bales with a front-end tractor grapple and place it on a scale trailer.  It worked pretty well, but it did take a long time to harvest a test.

We have used short plots hoping for better ground uniformity.  This method of harvesting the plot with a flail mower and vacuum seemed to work well.  It would dump the harvested hay at the end of the plot and it would be weighed on the scale trailer.  It was important to have the plots go at a right angle to the alfalfa rows rather than with the rows so that all rows are part of a plot.  This method was ok, but the vacuum didn’t always pick up all of the alfalfa and we had to rake the plots to pick up loose stems, which took time and you weren’t always sure you got it all.

One season we tried harvesting a uniform section of windrow.  A twenty-five foot template was used and the hay was cut at the template edges and the hay inside it was weighed.  There were doubts on the effectiveness, which were confirmed with unacceptable variability.  Plus you had to lift and carry the heavy hay on a tarp to the weigh cart.

In recent years we have gone back to the long plots and cut and blew the chopped the hay into a smaller and more accurate scale cart.  In all cases with wet hay, samples were collected not only for quality measurements by a lab, but also for moisture content.  The moisture would always be higher at the start of harvest in the morning vs the end as it got hotter.  This is a very necessary part of hay silage harvest.  This went fairly well but wasn’t overly reliable for detecting treatment differences as we thought it should be as perhaps the plots were too big and variable.

This year we revisited a method that was tried years ago once and then discontinued as it just seemed so improbable.  But this method has been used by a number of researchers and is university approved.   Cornell university is one of these, as I have worked with a researcher who followed this technique.  It is referred to as the Hula Hoop method.  This is where a Hula Hoop is tossed into the plots and the hay from inside the hoop is clipped and weighed.  Again, per cent moisture is very important to this measurement.  A rather large hoop at nearly three feet in diameter was used.  After the hoop was placed, any stems outside the hoop that got bent to the inside are removed.  In harvesting this way for the first time this year, it was found that walking around the hoop to push down the outside stems gave more room and made it easier to clip the hay in the hoop diameter.  It really didn’t take long.  Then as two people held the stems up with their hands, the third person would clip it at uniform height with manual hedge clippers for weighing on an accurate scale brought to the field.  Just make sure that fingers are not in the way of the clippers!  Three hoop-measurements were taken per fifty foot plot at similar distances for all plots.  Again the plots were perpendicular to the rows.  I will say that I was pleased with this method as consistent weight and treatment effects were measured across reps.  I hope to have a final report at the end.  The next harvest is soon. 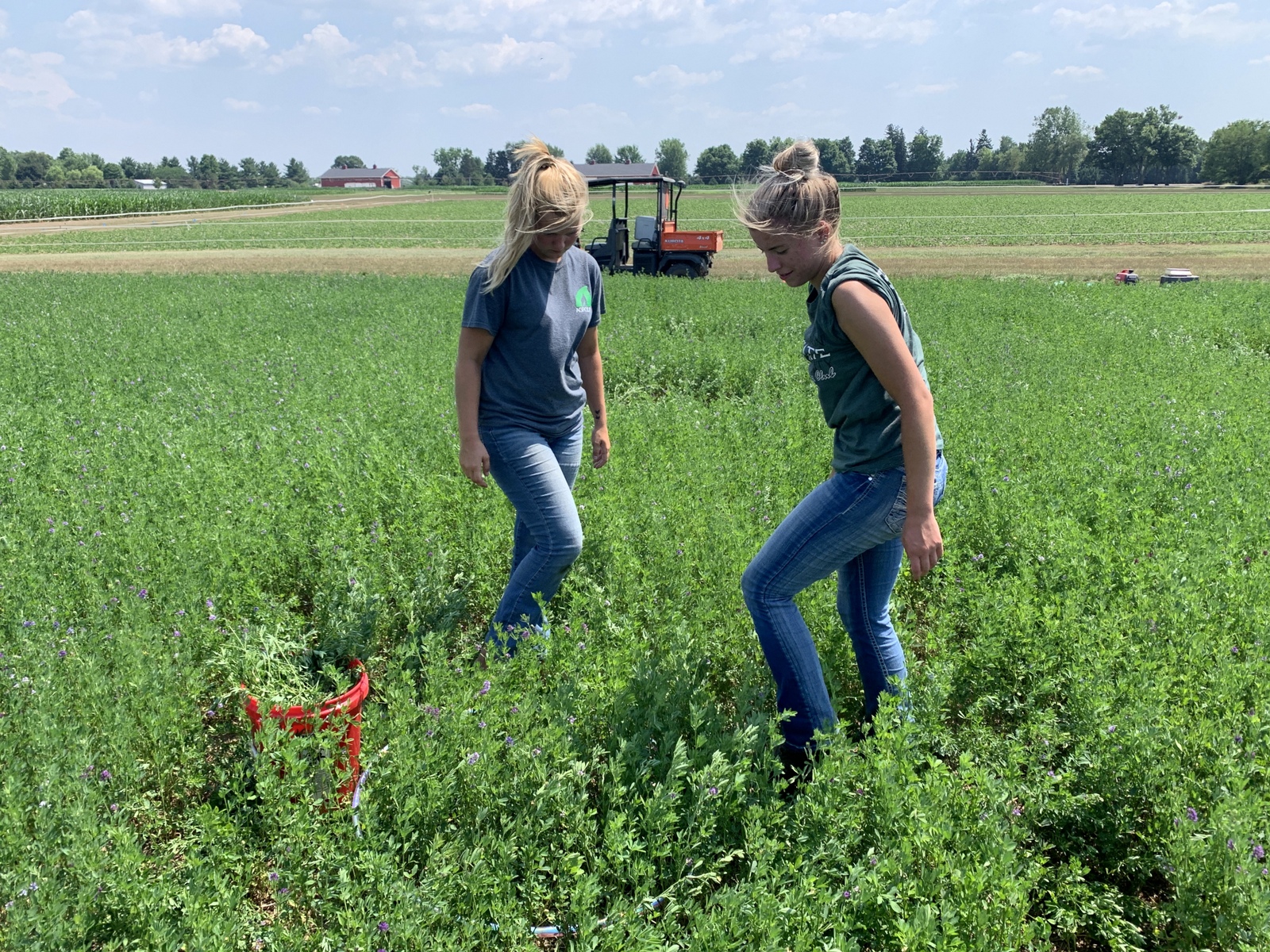 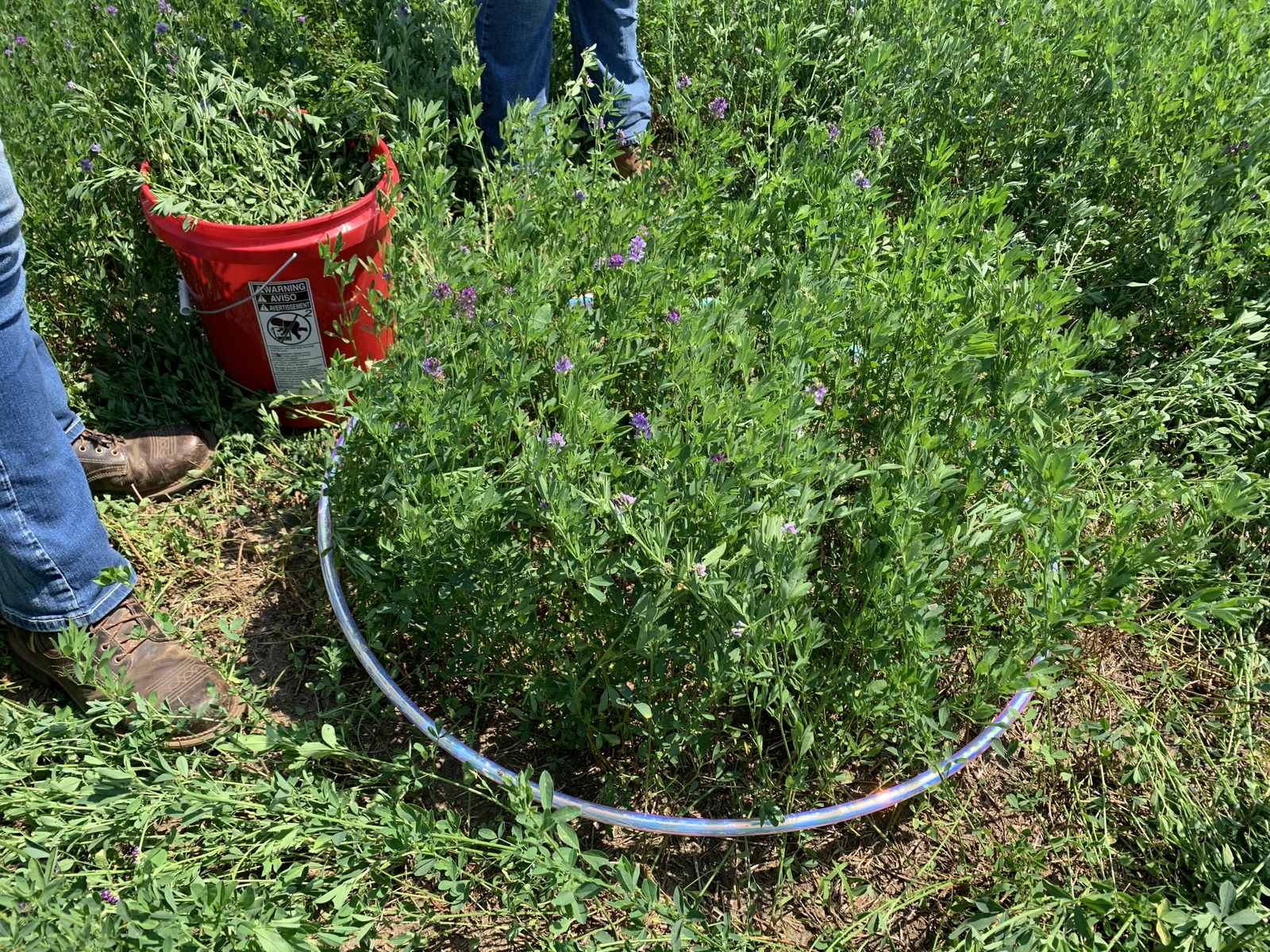 So we will continue with different methods of alfalfa plotwork in order to obtain the best research results.